Home » Warfare with the devil 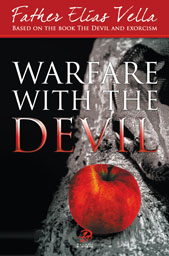 Warfare with the devil

Based on the book The Devil and exorcism, the author offer you a ‘mini’ manual for training, guidance and growth in deliverance.

He explains the basics of Church teaching about the devil, as given to us in the Bible and the Magisterium of the Church.

Also provides information about the exorcism and experiences relating to the Enemy. Evil exists and we must learn to deal with it.

Franciscan conventual, Father Elias Vella was born in Malta on February 28, 1941. He studied theology and catechesis at the Lateran University in Rome. In 1964 he was ordained priest. From 1980 to 1986 was minister provincial of the Franciscan conventuals in Malta. For eight years he served as the delegate of the archbishop to religious and nuns in Malta. For 24 years he was a Professor of Dogmatic Teology and Pastoral  eology at the INSERM (Institutum Nationalis Studiorum Ecclesiasticorum Religiosorum Melitensium). Today he is considered as one of the most prominent exorcists both in his country and elsewhere, besides being also the President of the Archdiocesan Commission on Occult and Satanism in Malta. Father Elias leads prayers, seminars, retreats and spiritual exercises in several countries, including India, Philippines, Australia, West Africa, Italy, Germany, Poland, England and the United States. In Brazil has published ten works of religious literature – three of them were published in English Language.